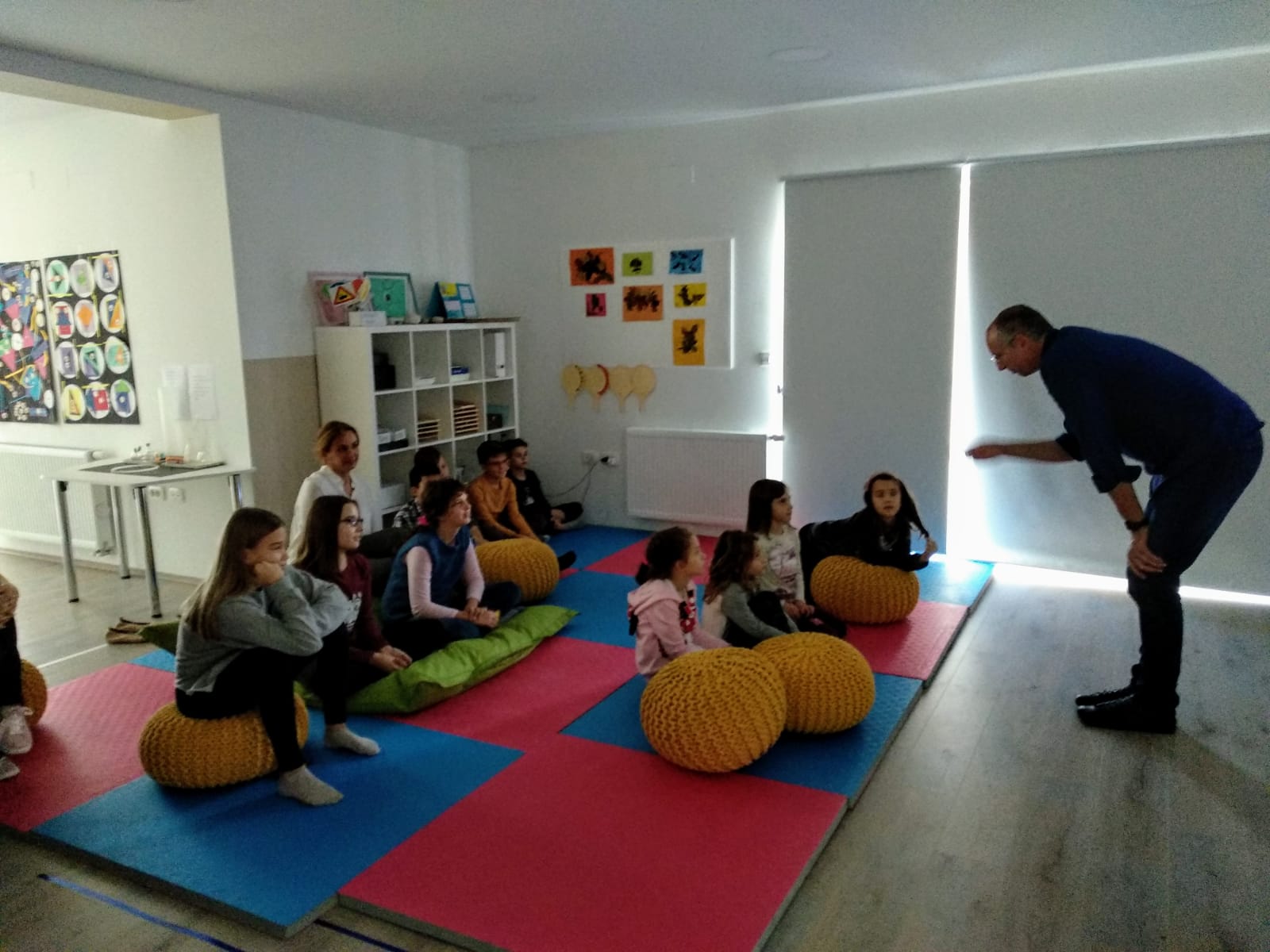 “A beautiful story about extraordinary children and critical thinking.”

Nova škola in Samobor is a private elementary school with a very nice modern interior and exterior. I’m sure children enjoy spending time there.

I was there to give a lecture on the Universe, stars, atoms, etc… to four little girls from the 1st grade, several older students, parents, grandparents, teachers and my colleague who organized my visit. As it was a very diverse audience, I decided to talk primarily to the little ones. (Although I hope the others found it useful and interesting as well.)

I started the lecture by asking the girls for their names and I made comments about their shirts. One was called Ema, like my daughter, the other one is Emili, one had a picture of Paris on her shirt and one was called Vita. I told Vita how I met a little boy named Vito at a store this morning and how that little guy knew everything about the Universe. He literally left me speechless. Later I found out that his dad loved science and has obviously transferred that passion to his son.

And so, I started talking and Vita started making comments about everything I said. She actually corrected the things I said and, what’s more, everything that she said was true.

By trying to make science more popular and approachable, especially for the little ones, you have to simplify many things. Well, Vita wasn’t buying into that. She really knows her stuff.

For example, at one point I said: ‘Look at the Earth! It is like a perfect smooth sphere!.’

‘It is not a perfect sphere! It’s slightly flattened.’ And she is right. The Earth is really slightly flattened at the poles. It is normal to hear that from an adult, but you just have to be fascinated when you hear it from a child.

Vita continued to correct me all the way through my lecture and the rest of us were laughing like crazy. She was funny, direct, and serious at certain points. She also came up with a couple of jokes. (I think that coming up with a joke and using irony are signs of high intelligence in a child.)

The best part was the end of my lecture. I usually tell children how everything around us is made up of atoms. Everything! I show them a wall and I ask them: ‘What is this wall made up of?’ They usually say: ‘Of atoms.’ I ask the same question about a ceiling, floor, curtains, a computer … and at the end about us humans. And the answer is always the same: ‘We are made of atoms.’

At the end of our time together Vita asked me what electricity is made of. My answer is: ‘Electricity is actually the movement of electrons.’ To which she says: ‘You see! Not EVERYTHING is made of atoms!’,and we all burst into laughter.

Vita’s mum, grandma and grandpa were also in the audience. I congratulated them on such a fascinating little girl, one of the most intelligent children I have ever met. She really is terrific – funny, playful, intelligent and happy.

My point here is this: Teach children to be critical thinkers. Let them question everything. Don’t let them take anything for granted. Teach them to substantiate their ideas. You will certainly find that difficult because you will also have to substantiate your own ideas and things that you demand from them. But it’s OK, life is not supposed to be easy.:)“